By: Allison Spurrell
A wine of style, for fall 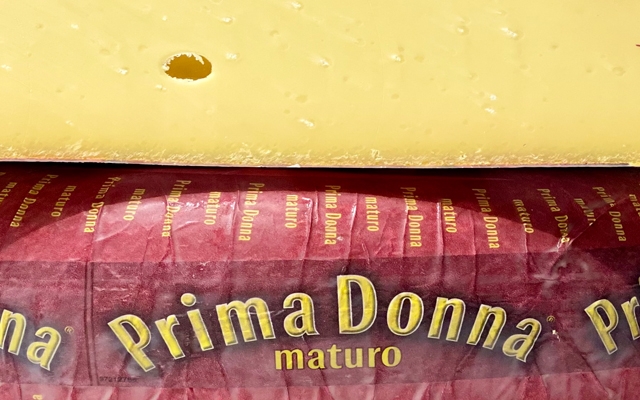 A great match for a glass of one your favourite local pinot noirs.

Origin: Made by the Vandersterre Group in The Netherlands

Style: Prima Donna is an aged hard cheese. The idea behind this Dutch cheese was to create a firm aged cheese with some of the characteristic nuttiness of a gruyere and the sharpness of an Italian grating cheese.

Description: This cheese is made in large wheels, weighing in at twelve kilos. It does look suspiciously like a Gouda in shape but that is where the resemblance ends. Prima Donna is available in three ages: Fino, the least aged; Maturo; and Forte. Most hard cheeses are sold with descriptors that denote how many months, or even years they are aged. Prima Donna is aged by batch, until the cheese reaches the flavour and texture the cheese making team is looking for. They use Maturo to tell the story of the style rather than just telling you how long the cheese was aged for.

Tasting Notes: Prima Donna Maturo is slightly nutty tasting with a pleasant sharp note. The texture of the tyrosine crystals, showing as small white dots all over the paste of the cheese, adds an interesting contrast to its smooth rich texture. Tyrosine crystals occur naturally in most aged cheeses. The memorable thing about this cheese though is the amazing sweet, caramel finish. As with many aged cheeses, the flavour lasts a long time on your palate. Rather than being left with slightly bitter taste, as is often the case with sharper aged cheeses like cheddar, Prima Donna has a buttery sweet finish that has amazing staying power.

Pairing: Because of the Prima Donna’s natural sweetness, it can stand up to many savoury condiments. Something a little spicy, or with a little vinegar kick like a chutney would complement it well, but to be honest it needs very little preparation to enjoy. Cut it into some small chunks and nothing else is needed. I served this as one of ten cheeses with a local Pinot Noir during an online tasting recently.  After the tasting I heard back from so many participants that this was their favourite pairing of the evening.

Here are a few wine pairing suggestions from GOW: