By: Allison Spurrell
A classic delicacy of the Loire Valley. 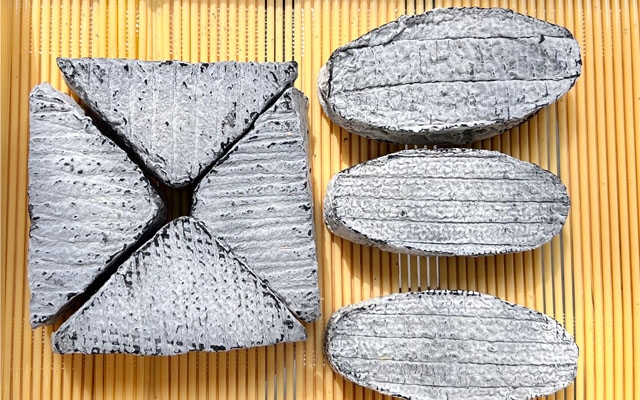 There are a multitude of shapes and styles made and cheesemakers from all over the globe pay tribute to those traditional cheeses by making their own versions.

One thing you will often see is ash covered goat cheese. This is a strange sounding practice that has practical roots. Originally, the ash came from burned vine clippings, and was dusted on the cheese to discourage insects, microbes, and mold. The ash also helps to dry the surface of the cheese slightly which helps to preserve it.

While it prevented unfavourable molds, it helped the growth of good surface molds. Goat cheeses are very lactic in nature and very delicate and soft. The ash coating helps to form a rind, and that in turn helps to give the cheese some structure.

Although traditionally ash from vine clippings was used, ash made from charred vegetables is now often used instead.  This is basically the same thing but made in a more hygienic setting.

Shapes and sizes of ash covered goat cheeses range from small logs to flat disks, and every other variation you can think of especially in the Loire or the Perigord. Some of the most famous French goat cheeses are Valençay which is shaped like a pyramid with a lobbed off top, Sainte-Maure de Touraine which is a raw milk log with a straw running through the center of it, and Selle-sur-Cher which is a softer disk. Well-known cheeses in North America are Humboldt Fog from California, and Grey Owl from Québec.

Although there is some physical resemblance because of the ash covering, the taste of these cheeses can be very different. Softer ripened cheeses like the Sell-sur-Cher tend to be more barnyardy tasting. Firmer, slightly more dried styles like the Triangle from the Loire Valley in our photo, tend to be a bit nuttier. If you have a fresh goat cheese with ash dusted over it, like Besace de Berger then you will a have a more tangy, fresh style which will be very different from the first two styles.

Because of the diverse taste profile of these cheeses, it’s hard to recommend just one accompaniment. For the fresh style goats, a bright, quite sweets compote would be great, perhaps black cherry or even blackberry. I would recommend something less sweet for the more ripened styles, maybe just some dried fruit and pistachios to decorate your plate.