BC A-Z : Sommelier of the Year 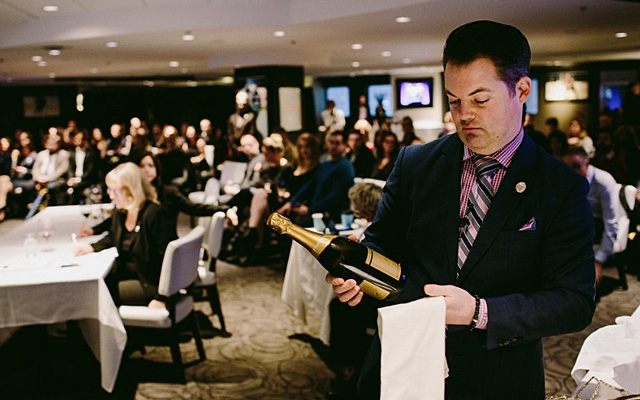 Sideways, Bottle Shock, Mondovino, SOMM 1 and 2, A Year In Burgundy, and now Sour Grapes - wine movies have clearly moved into the mainstream.

Never has there been so much interest in the machinations of the wine world, and especially the seemingly cloaked world of the sommelier.

What’s behind the fascination that movies like SOMM 1 and 2 have universally roused?  For wine and food insiders it is simple:  it’s what we live and breathe. But for the average person - it’s more likely a good dose of curiosity mixed with a measure of BS detection. The reality usually surprises everyone; the art of Sommellerie is a blend of scholarship, eloquence, physical conditioning, pinpoint timing, and palate precision. And to see this competitive prowess close-up is really, really entertaining.

Earlier this month Rogers Arena was the stage for British Columbia’s Best Sommelier smack-down. An NHL arena is a fitting venue for the theatre sports that competitive decanting, slurping, and food pairing has become. Similar Sommelier events in London or Japan have drawn thousands of spectators, and though the crowd at the home of the Vancouver Canucks was modest, it was engaged and enthralled.

Here’s how it worked: candidates (they must earn at least 50% of their income as a working, on-the-floor somm) throw their hat in the ring, hit the books, practice on their restaurant customers, strike up tasting groups to share the cost of wine, spirits, cocktails, sake, beer (anything alcoholic is possible, as well as coffee and tea at the highest competitive level), and prepare for the big day. Dressed in their service finery they show up early and hopeful, and sit a pretty stiff theory exam including a detailed written evaluation of two wines, tasted blind.  Theory covers grape growing and winemaking, the entire globe of wine appellations, grape varieties, food matching, beer, spirits, fortified wines and sake. Some questions are multiple choice, some short answer, some involve developing a menu and pairing wines to it. It is a challenging examination - brutal was the word the eventual winner used - but its difficulty helps to spread out results and identify the very best candidates.

The exam is marked behind closed doors by the technical committee, headed by me, CAPS-BC vice-president. CAPS, the Canadian Association of Professional Sommeliers, is affiliated with the Association de la Sommellerie Internationale (ASI) headquartered in Paris. Canada is one of 52 member and 3 observer countries. Since its inception in 1989 in Quebec, CAPS has promoted the sommelier profession, notably by its participation in the Best Sommelier of the World Competition. After exams are marked and candidates take a much-needed lunch break, the candidates, judges and crowds gather - and the three top theory scores are announced to noisy acclaim.

They move on immediately to the live competition and pit their skills against one another before the audience and a panel of expert judges who scrutinize their every move, service technique, wine and food choices, and tasting. There are five components to this panic-inducing final combat, and each candidate performs for over 45 minutes.  First are two table-side contests of opening and serving sparkling wine, then decanting a magnum of red wine, with wily questions from the table judges all the while. Food and wine pairing is the next challenge, followed by the glamour section: the blind tasting. Here the candidates face a row of glasses, an invisible clock ticks while they verbally decode the wines, and put their opinions (and tasting chops) on the line. This year the trio faced four wines, two spirits, plus one cocktail - and had 18 minutes to figure it all out as accurately as possible. It’s mind blowingly impressive to see this live, and sceptics are silenced by the calm and decisive analysis, finished with just seconds to spare. No one of course knows if they are correct save for the judges, but doesn’t matter a shred from the audience perspective. It’s mesmerizing.

Wine list correction comes last: three minutes to spot more errors than the next guy. The mistakes are subtle, such as ‘Les’ instead if ‘Le’; phantom vintages, cuvees that never were, prices that are plain wrong, appellation misspelling, and of course, some wines that are listed entirely incorrectly. It’s the final few meters of the sprint, and can be the difference maker.

Once finished the judges sequester themselves and begin the discussion, tallying, triple-checking and finally, some two hours later, the results were announced at the Cibo afterparty.

Sixteen brave and confident sommeliers started the day - including four women. The top three represented the level playing field that competition guarantees: two were fine-dining veterans and one a bar/wine pro from a casual bistro. The final three were Shane Taylor, a twice-time top finalist and wine director at CinCin Restaurant; Todd Prucyk from Hawksworth Restaurant; and Matthew Landry of the Stable House Bistro. The three know each other well, are part of rigorous tasting groups, spend several hours studying daily. All cited restaurant support as a large part of their success. Véronique Rivest, visiting judge and the world’s second best Sommelier in 2013 announced the winner, proclaiming that ‘perseverance paid off’.  Shane Taylor had won the day.

Taylor professed to be a relieved winner, stating “I had worked hard the previous times but took the effort to another level this year and was happy with the result.”  The ‘another level’ involved 15-20 hours a week of competition prep.  Shane acknowledged that he is “very fortunate where I work in that we are high end and high volume. When you are working the floor it is high stress, action-packed and you are making recommendations to guests on the fly. All of which is great training for the Sommelier Competitions which recreate an average night on the floor at CinCin.” He also gave credit to his mother, his role model for hard work and tenacity: “When faced with a busy December, ungodly work hours and preparing for a Sommelier Competition, I drew inspiration from my Mum and what she does on a regular basis, making the impossible look easy!”

First runner up Todd Prucyk praised his colleagues: “Bryant (Mao, Wine Director) at Hawksworth helped me prepare by giving me tasting menus and having me pair beverages with them” as well as mentorship from fellow competitors. “I can't thank JY (that’s Jason Yamasaki, winner in 2014 who held weekly training sessions running up the January 9th competition) enough for the mentorship sessions. I went to every one I could and took away a lot of knowledge from him and the other competitors.”  When asked who inspires him, Prucyk’s comments reveal the humbling nature of competition “...everyday I see Bryant Mao, Alistair Veen (2015 winner and chef/somm at Tap Restaurant) and especially Sean Nelson (Vij’s) in action, I feel like it's my first day in a restaurant.”

Second runner up, and perhaps dark horse is the right term, was Matthew Landry, The Stable House Bistro’s bar and wine guy, GM and DJ.  Anyone who has seen him study and blind taste was not surprised, but Matt was. “What surprised me most was actually making it into the top 3. I thought of this year as a practice run to get an idea of what was expected and then next year I'd make a more serious run for it. ‘It's an honour just to be nominated’ makes so much more sense to me now.” Matthew’s high theory result which vaulted him into the finals proved Véronique Rivest’s advice to the candidates at a recent seminar.  She always stresses that competition starts with knowledge. Crush the theory exam, and you have a fighting chance.  If your wine studies, those 10,000 hours of detailed learning, can’t get you to the finals, it doesn’t matter how smooth you are tableside.

What’s next for Shane, Todd and Matthew is more practice, and more competitions. Shane, along with Jason Yamasaki and Alistair Veen, will compete in the Best Sommelier of Canada 2017 contest, to be held in Vancouver at Rogers Arena over the Labour Day weekend. He’ll also sit the grueling theory exam for the Court of Master Sommeliers in July. Todd and Matthew will set their sights on the 2018 Best Sommelier of B.C. showdown.  Having come so far, they are hooked, excited and determined.

British Columbia has a global reputation for its outstanding restaurants and high calibre service. Competitions like the CAPS Best Sommelier of B.C. help unite, galvanize and motivate our sommelier community which in turn helps elevate our province’s position on the world food and wine stage. And as restaurant customers we get to witness the theatre up close and personal; we get to see the 10,000 hours in action, the perfect wine list, wine and food pairing wisdom, and smooth service techniques developed, refined and honed over time. 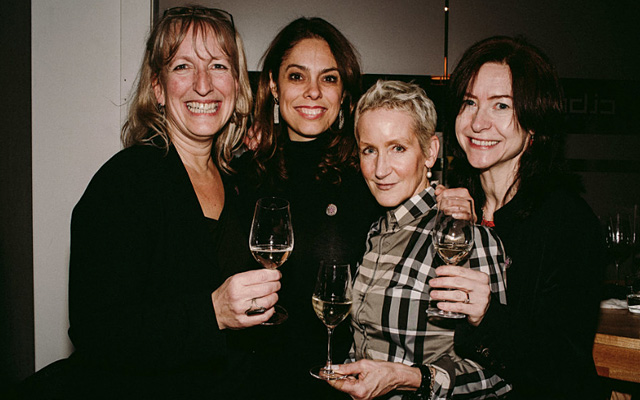 DJ Kearney is a Vancouver-based wine educator, wine writer, judge, presenter and classically trained chef. She has trained hundreds of professional Sommeliers for the International Sommelier Guild during a decade as a non-stop travelling instructor throughout western North America. A diverse background in wine, food and geology makes DJ uniquely qualified to guide the discovery of the world’s wine regions, the understanding of terroir, the sharpening of palates, and the chemistry of food and wine harmony. She appears on radio and television regularly, moderates and presents at wine festivals throughout North America and judges several major wine competitions. DJ holds the WSET Diploma, the ISG Sommelier Diploma and is in the Master of Wine program as an exam-ready candidate.