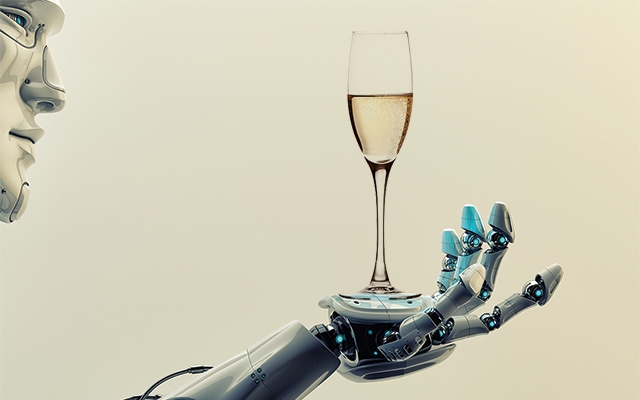 Sparkling wine accounts for about nine per cent of its domestic wine sales and 13 per cent of total wine imports in Oz.

Australians tend to drink a lot of bubble, which is why researchers there are using robots to unravel the mysteries of modern sparkling wine and how it is performing in the midst of global climate change. It’s the kind of question you can expect from the folks from Down Under who know just how valuable the Australian wine industry is to the country’s economy. Australian researchers are working hard to keep pace.

Before we progress to the robot, I mention this because in four weeks. the Australian wine industry will be in Vancouver en masse as the theme country of the 37th Vancouver International Wine Festival and its signature red grape shiraz will form a large portion of labels that reflect the festival’s underlying varietal theme: wines made with shiraz or syrah. Tickets are going fast at www.vanwinefest.ca

Our quarterly Salut section next month will delve into all things Oz.

Now back to the bubbles. Researchers have long known that increased temperatures and carbon dioxide levels in the atmosphere affect the flavour and aroma of wines. A warmer climate can similarly decrease protein concentration in plants and increased alcohol, leaving researchers to wonder and determine how climate change might influence the final quality of sparkling wine. The thinking is since several compounds, including protein concentration and alcohol are related to foam stability and the ability of the wine to produce those tiny bubbles, there may be a corresponding effect on quality.

Adelaide researchers Sigfredo Fuentes, Bruna Lima, Maeva Caron and Kate Howell, in an article in the May-June, 2104 issue of the Wine and Viticulture Journal wrote the quality of sparkling wine can be “visually assessed by its colour, bubble behaviour, appearance (bead) and foam persistence (mousse).” But as you may suspect, such parameters are extremely variable and can be easily affected by the manner you open and or pour sparkling wine, the shape of the glass, and or, the temperature of the wine when served.

Using robotics and chemometrics, the analysis of chemical data and or data mining of large data sets, allows researchers to regulate and monitor all outside influences so they can repeatedly measure each sparkling wine for its quality and correlate the data with traditional measures of quality.

A robotic bottle pourer has been developed to standardize time and wine volume of pouring into a standardized vessel. Using images shot with a digital camera, scientists hope to “study the pictures using image analysis algorithms that convey the information into bubble size and speed, foamability (ability of the wine to produce foam), foam persistence and stability, and collar stability.”

Maybe you thought it was all about which sparkling wine you liked best. It is, but the Australians know it is a big wide world out there and every wine you send into it must be the best you can make for the price; hence the constant emphasis on research to improve the breed.

The Vancouver festival has an early start on Friday, Feb. 20, at the Fairmont Hotel Vancouver with the Bacchanalia gala dinner and auction. The move to Friday night (you can sleep in on Saturday) should further revive this long running event. The sparkling wine reception will feature one of the best bubbles made in Australia, the Jansz Premium Cuvée NV, no matter what the robots say. Tickets are $395 but the wine list is formidable. For more information go to gala@vanwinefest.ca or call 604.637.3098.