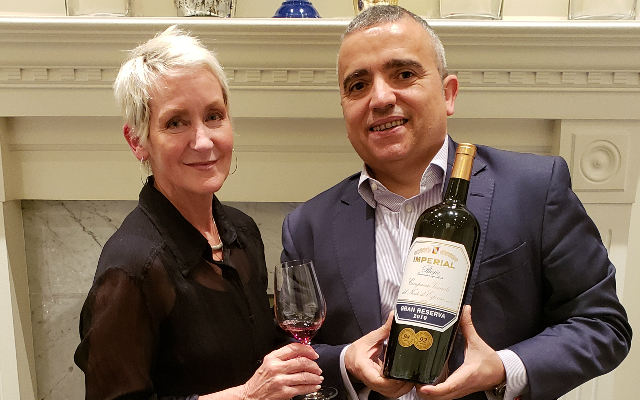 Thank you for 150+ years of history and evolution and for collectively insisting on higher quality under recent wine law tweaks and for being steadfast in your identity, but mostly for giving us wonderful bright and burnished wines to drink at an unbeatable price.

In mid-May, I co-hosted an intimate dinner at Tableau Bar Bistro featuring the expressive wines of Rioja’s CVNE, the Compañía Vinícola del Norte de España. Toni Batet, CVNE’s charming and seasoned Global Export Director, led us through a tasting of seven wines that embodied the soul of this distinguished estate and shed light on Rioja’s stature as a reliable repository for high-quality, well-priced wines that provide astonishing quality-price-ratio (QPR) - perhaps the greatest in the wine world. More on this point later; let’s look at CVNE first.

Pronounced ‘coo-nay’, the historic estate of CVNE was founded in 1879 in the railroad town of Haro, at a time when Rioja was booming. The boom was fuelled by the phylloxera catastrophe that was decimating French vineyards and causing a severe wine shortage. And there, conveniently, was Rioja, just a short hop over the Pyrenees from Bordeaux, with an endless supply of wood-mellowed wines ready to be hauled north across the mountains in ox carts. There is no doubt that the phylloxera disaster was key to the establishment of Rioja’s great estates and markets, and CVNE has remained rock-steady ever since.

The founding Real de Asúa brothers, who only moved to Haro hoping the dry climate would relieve asthma, were completely new to the wine business yet they showed all the right instincts for quality when they established CVNE. Rather than blending fruit from across the sprawling Rioja region, which was the norm at the time, they focused on a more specific fruit provenance: they launched Spain’s first white wine brand when Monopole was born in 1915, and in 1909 they hired the celebrity architect of the day, Gustave Eiffel, long, long before Gehry, Calatrava, and Hadid left their marks in Spain. The brothers’ heirs have kept up the tradition of innovation, employing Rioja’s first concrete fermentation cellar in 1940, and first gravity flow winery, built in 2004 at the stunning new Vina Real facility. Robert Parker awarded perfect 100-point scores for the 1939, 1949 and 1959 vintages, and more importantly, CVNE bagged the #1 position in the Spectator’s prestigious 2013 Top 100 Wines for the immortal Imperial Gran Reserva 2004, Spain’s only wine ever so honoured. The family's 5th generation is now overseeing the estate, with a strong team of women making the wines.

CVNE has four distinct brands: Cune, Viña Real, Imperial and Contino. The biggest is Cune for wines made from only Rioja Alta-grown grapes. This is a hilly, Atlantic-influenced sub-region with abundant iron-rich clay-limestone soils yielding structured, fulsome, high acid wines. During the dinner, Batet recounted the humorous story behind the label that involved the brothers taking a sample label to the local printer to bottle their first vintage. What they picked up were labels that read ‘CUNE’ rather than CVNE because the printer had decided that folks would better understand Cune. The brothers clearly rolled with the label (and it stuck), but it’s not known whether this is because they agreed with the printer or just had no time to reprint.

Cune wines are made at all Rioja ageing levels - Crianza, Reserva and Gran Reserva - and adhere to a classic blend of 85 percent tempranillo bolstered with garnacha for the body, and graciano and mazuelo for the acid lift. There is a heavy emphasis on cheerful, forward fruit which always ensures Cune wines have broad appeal and easy drinkability.

CVNE’s Viña Real estate is in the small and elite sub-region of Rioja Alavesa. Higher elevation and cooler Atlantic weather produce wines that tend to be lighter, more ethereal, and finer boned from chalky clay terroir. If Cune is fruit-forward, Viña Real wines are more mineral-forward, with a fine, fragrant cask-conditioned character. The brand was launched in 1920 from a forward-thinking gravity-flow winery and magnificent barrel ageing cellars. Smaller in production than Cune, Viña Real wines strike a balance between tradition and modernity derived from a barrel ageing regimen of both American and French oak. Here’s a tip: Viña Real’s Reservas can be a fine as others’ Gran Reservas.

CVNE’s Imperial range is just for Reserva and Gran Reserva wines. The fruit source is only vineyards in Rioja Alta, and the vines are mature and low yielding. The Gran Reserva uses vines up to 65+ years of age. Established in 1920, Imperial was named for a special run in imperial pint bottles for the English market. Unlike the other CVNE brands, Imperial is fermented in large open-top French oak vats rather than stainless steel and/or concrete before refinement in both American and French barriques. The wines are always majestic and elegant, with great depth and complexity. Complete and polished, they age very slowly and gracefully.

Finally, the Contino brand started as a collaboration between CVNE and a local Alavesa family to initiate a single vineyard project and introduce the chateau concept to Rioja. Dedicated vineyards of old tempranillo and graciano vines are the source of Contino’s potent and vigorous wines that receive extended ageing. Brand new French barriques are used for some of the reds, and a stunning white, creating a thoroughly modern Rioja experience.

CVNE wines are authentic Rioja classics, brands that are devoted to the region, and made by the direct descendants of the founders. They are wines that bring to life the rich antiquity and evolution of this historic part of Spain.

And this is the QPR point I was alluding to previously: Rioja produces wines that rival the quality of the greatest traditional regions in Europe, such as Bordeaux, Tuscany, Piedmont, and Burgundy. Rioja offers an exciting hierarchy of reds, whites, and rosés defined by time spent in cask and bottle. Furthermore, Rioja ages the wines for us wine lovers, carefully cask-conditioning and bottle-resting wines in accordance with tight rules that uphold tradition, typicity and quality. Wines from Rioja land on our shelves when producers like CVNE deem that they are just beginning to hit their drinking stride. And the prices? Crazy reasonable. No classic wine region can match Rioja’s amazing offer at mid-range prices, and no other region is so committed to marketing wines that are defined by maturation character. As I said at the beginning, thank you, Rioja.

Here are are the new ageing requirements for the use of traditional terms Crianza, Reserva and Gran Reserva in Rioja DOCa:

● For the traditional term Crianza: Ageing is to take place for at least two calendar years in a winery included in the Register of Ageing Wineries. The wines will be subjected to the traditional mixed ageing system in oak barrels of approximately 225 litres capacity, continuously and without interruption for no less than one year for red wines and for no less than six months for white wines and rosés, followed and complemented with ageing in the bottle. The Control Board may adopt decisions regarding the start of the ageing period of wines for calculations.

● For the term Gran Añada: Quality sparkling wine: The winemaking process, from the moment of tirage until disgorging, no less than 36 months. The term must be accompanied by the vintage year.

DJ Kearney is a Vancouver-based wine educator, wine writer, judge, presenter and classically trained chef. She has trained hundreds of professional Sommeliers for the International Sommelier Guild during a decade as a non-stop travelling instructor throughout western North America.

A diverse background in wine, food and geology makes DJ uniquely qualified to guide the discovery of the world’s wine regions, the understanding of terroir, the sharpening of palates, and the chemistry of food and wine harmony.

DJ is a contributing editor to Vancouver Magazine and has written for Western Living, Eat Magazine, and Wine Access until its demise. She appears on radio and television regularly; moderates and presents at wine festivals throughout North America and judges several major wine competitions annually and is the Chief Judge of the prestigious Vancouver Magazine International Wine Competition, now in its 10th year. She consults for a small client list assisting with wine selections, lists and training. DJ holds the WSET Diploma, the ISG Sommelier Diploma and is in the Master of Wine program as an exam-ready candidate.

Firmly believing in the benefits of wine and health, DJ is a distance runner, a black belt in Tae Kwon Do as well as a mother of twin black belts. DJ takes to heart the dictum of the late great Julia Child: moderation, and plenty of it.