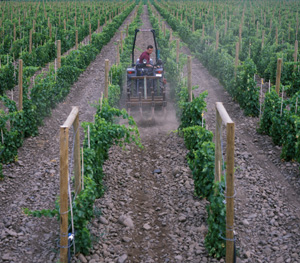 Washington's Cayuse Vineyards has become the first completely bio-dynamic winery in the State, according to vigneron and owner of Christophe Baron.

's Cayuse Vineyards has become the first completely bio-dynamic winery in the State, according to vigneron and owner of Christophe Baron.

Over the past few months Cayuse has consulted Philippe Armenier, a biodynamic farming specialist and previous owner of Domaine de Marcoux in Châteauneuf-du-Pape. Employing Armenier's advice, Cayuse was able to complete its biodynamic conversion in all its vineyards by late 2002.

Baron first visited the in 1996, when he happened upon a plot of land that had been recently ploughed up to reveal acres of softball-sized stones. The stony soil immediately reminded him of some of the great French appellations like Châteauneuf du Pape.

He named his vineyard after the Cayuse, a Native American tribe whose name was taken from the French cailloux-which means, of course, rocks. Hours of backbreaking work later, Cayuse Vineyards has become five biodynamic farmed estate vineyards over a total of 41 acres: Armada, Cailloux, Coccinelle [Ladybug], En Cerise [Cherry], and En Chamberlin.

The majority is planted with Syrah, and the rest dedicated to cabernet franc, cabernet sauvignon, grenache, merlot, mourvèdre, roussanne, tempranillo and viognier. They are highly stressed vineyards average a yield of only two tons per acre (30 hectolitres per hectare). Cayuse specializes in four estate-vineyard syrahs: "Bionic Frog" Syrah, Viognier, and two blends named "Camaspelo" and "Flying Pig." Future release plans include a tempranillo and a Southern-Rhône-inspired blend.