By: News Release
A challenging yet rewarding year. 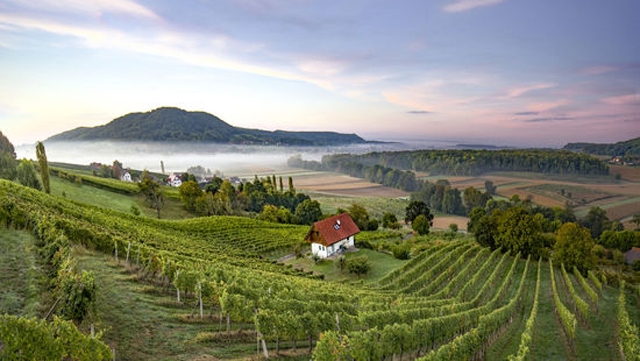 2020 will be remembered as a growing season of opposites, in which rain followed sun and cold followed warmth.

Combined with the specific features of the regions, this called for a great deal of intuition and patience from winegrowers. And they have been rewarded – we can expect some invigoratingly fresh whites, finely balanced reds and some sweet rarities.

Despite the 2020 growing season varying significantly between the individual winegrowing regions, fresh, aromatic, lighter white wines with a vibrant structure are emerging this year. In other words, a classic “Austrian” vintage. The picture is a little more nuanced for red wines, as high physiological grape ripeness in some red wine heartlands is raising hopes for very high quality with moderate alcohol content.

After a dry winter that barely earned its name, some areas experienced a slight delay in budding. A very warm and sunny April did little to accelerate development as it was accompanied in many places by extreme dryness that lasted for weeks. A few frosty nights caused damage in inconvenient locations but overall, this was insignificant. May saw great amounts of rainfall, and June was also very damp and changeable. Flowering occurred at the usual average time and was generally unproblematic, although there was occasional coulure in some grape varieties.

A good old-fashioned summer followed, characterised by alternating sunny and rainy periods, with neither long heatwaves nor temperature spikes. In any case, the frequent precipitation led to strong plant growth and high disease pressure, so careful pruning work and good aeration of the grape zone were important to combat the spread of fungal diseases. By mid-August, the vineyards were in very good shape. However, some regions then saw localised hailstorms, which caused serious damage in certain areas of the Wachau, Kremstal and Traisental; some viticultural towns in Burgenland and Steiermark were also affected.

September was also a month of contrasts. On the one hand, there were as many sunshine hours as in a summer month and equally high daytime temperatures; on the other hand, many places saw prolonged heavy rain towards the end of the month with record precipitation levels. Winemakers had quite a job on their hands to keep their grapes healthy in the warm, damp weather. Relatively low night-time temperatures had a positive effect on aroma formation and acidity. The main harvest began in early September and mainly continued in very good conditions until late October. Even outside the winegrowing regions affected by hail, meticulous selection and the associated cost-intensive harvesting process was required.

In Niederösterreich (Lower Austria) and Wien (Vienna), very fresh and fruity wines are expected with a slightly lower alcohol content and more pronounced acidity than in recent years.

The typical characteristics of the grape varieties are expressed well, both in the flagship Grüner Veltliner and in the Rieslings and the Pinot family. It could be a little more difficult for bouquet wines like Muskateller and Traminer to show off their full potential. Klassik wines and Gebietsweine (regional wines) should turn out to be very pleasant as they combine bold freshness and clear fruitiness with invigorating, non-aggressive acidity. The performance of the white Reserve wines is eagerly anticipated. Due to meticulous selection in 2020, only small volumes of these could be produced. Here, we can hope for Riedenweine (single-vineyard wines) and premium wines with balance, precision, structure and stability for longer storage.

The key red winegrowing regions of Thermenregion and Carnuntum are expecting fruity, somewhat lighter and elegant red wines with all grape varieties and categories represented; the best wines could match the delicate fruitiness of the 2016 vintage. Alongside Zweigelt and Blaufränkisch, Sankt Laurent and Pinot Noir are especially promising.

According to numerous reports and initial tastings, Burgenland could be one of the winners in the current vintage. On the one hand, the heavy autumn rainfall did not reach the wine villages on Lake Neusiedl at all and had precious little effect in central and southern Burgenland. On the other hand, the region was able to reap above-average benefits of early grape ripening caused by the climatic conditions. As a result, the main harvest around Lake Neusiedl was completed before the weather changed in the second half of September. The only downside came in the form of several localised hailstorms.

The 2020 white wines from all grape varieties are characterised by a mature, harmonious flavour, which is enhanced by a zesty acidity, making expectations of Leithaberg and similar wines high.

Expectations are also high for all Burgenland appellations with regard to red wine quality. As is always the case in cooler years, it was important to reduce the yield accordingly in 2020. In the best cases, it should be possible to produce red wines of cool elegance and soft fruitiness, which may be comparable with those of 2016. Overall, we can expect well balanced Zweigelt and Blaufränkisch of astounding maturity, while the French varieties from suitable locations could also draw attention.

It is still a little early to make any predictions regarding dessert wines. However, late yet noble sweet rarities like Ruster Ausbruch DAC and Neusiedlersee DAC could be obtained, albeit in smaller quantities. Occasional overnight frosts have even enabled the pressing of Eiswein.

STYRIAN, THROUGH AND THROUGH

Steiermark’s lighter white Gebietsweine will undoubtedly display regional typicity. Wine connoisseurs can look forward to crisp, fresh Welschriesling, Muskatellers and Sauvignons that combine pure, varietally typical fruitiness with zest. Just like the denser Ortsweine (villages wines) and Riedenweine (single-vineyard wines), these also have those features that make them so distinct.

In Steiermark too, the rainy low-pressure area in September was a turning point and caused interruptions to the harvest. Those who had the nerve to wait a while after the rain before resuming the harvest were rewarded with a wonderfully sunny October, which allowed grapes to ripen to perfection. Of course, precise selection was then essential to bring in a healthy grape harvest, with the associated loss of volume. So, it was possible to harvest those very Riedenweine that are responsible for the high renown of the Steiermark wine producers.

The Steiermark flagship Sauvignon Blanc should turn out to be especially attractive and characteristic as it naturally benefits from a good supply of water. After the wait mentioned previously, the Pinot family has also performed at a good level, and this is also true of the Rieslings in Sausal. In some cases, it may be a little more difficult for the Muskateller, as the appearance of the spotted-wing drosophila occasionally forced an undesirable early harvest. Overall, the Steiermark whites could reach a profile similar to that achieved by the 2013 wines and the 2016 wines that were unfortunately only available in smaller quantities.

The same is also true for Schilcher from Weststeiermark, which after several years characterised by high maturity has returned to featuring somewhat more typical freshness and zest, as well as a ligther body.

All-round satisfaction was expressed this year in Bergland, which is comprised of a variety of winegrowing enclaves.

Winegrowers from Oberösterreich (Upper Austria) are reporting an extremely successful vintage, completely unimpaired by the vagaries of the weather. Accordingly, mature and intense wines full of juice and strength are expected.

Similarly pleasing news is also coming from Kärnten (Carinthia), where an equally pleasant autumn followed abundant precipitation in spring and summer to ensure satisfying maturity and distinctive aromatics. With higher acidity, the quantity and sugar gradation are lower than last year, but dynamic wines for easy drinking are assured.

In the Tyrolean and Vorarlberg vineyards in far-west Austria, prudent plant protection was more important than ever to ward off infestation by downy mildew (Peronospora) and mildew">powdery mildew (Oidium). Thorough defoliation of the grape zone was required to prevent Botrytis cinerea. The Alpine föhn winds that are typical here in autumn almost failed to materialise in 2020; however, by mid to late October, the harvest of mature grapes of above-average quality could be completed.